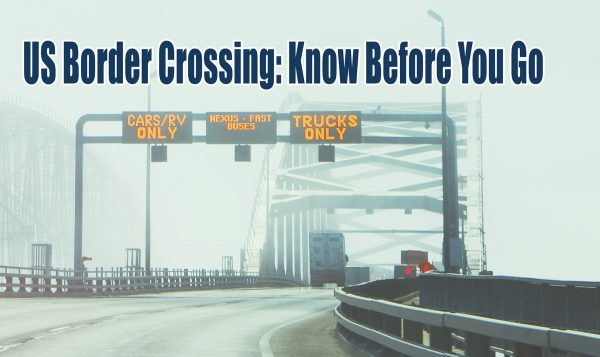 The U.S. Customs and Border Security (CBP) take their job very seriously and you should too. Canadians crossing the US border are being scrutinized more closely now than in previous years. According to The Globe and Mail, CBP agents turned away 27,772 people trying to enter the United States from Canada which represents an increase of 6.7 per cent from 2016 despite a 9 percent drop in border crossing trips by Canadians.

As a Canadian you have few rights when crossing into the US. CBP agents have the legal right to deny Canadian citizens from crossing into the United States and can go so far as to ban you from entry for several years. CBP officials have the right to ask any questions they deem relevant to entry. Probable cause and reasonable suspicion are not needed to search you or your personal property. This means CBP agents can search and even copy the contents of your personal electronics including your cell phone, tablet and laptop.

Have You Been Denied Entry To The U.S.?

While a Canadian record suspension (pardon) will seal your criminal record in Canada, is not necessarily enough to get you across the U.S. border. U.S. border agents have full access to Canadian criminal records. Depending on the CBP agents inquiries, you may have crossed the U.S. border in the past without incident but a detailed records search will show all past charges and convictions on a subsequent crossing.  A temporary Waiver of Inadmissibility, commonly called a “U.S. waiver”, allows entry to the the U.S. and is filed through Customs and Border Protection, a division of Homeland Security. The U.S. waiver application is an involved process and requires extensive documentation to be filed correctly in order to be approved.

A non-exhaustive list of offences that might render you inadmissible into the United States is: theft, possession of stole property, fraud, robbery, drug possession and trafficking, False Pretences, Sexual offenses, Mischief, and more.

Pardon Services has successfully filed thousands of temporary Waiver of Inadmissibility applications on behalf of our clients. We offer free, private consultations for Canadians that may have difficulty to travel to the U.S. Simply call us at 204-453-0099.